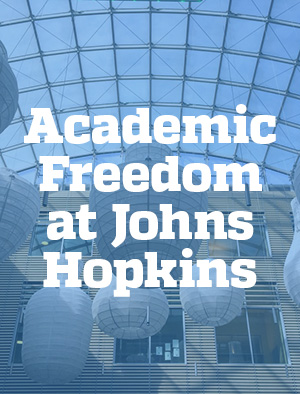 Academic freedom fuels Johns Hopkins’ greatest discoveries and emboldens our most illuminating debates. And yet, until now, our university has never had an official statement of principles elucidating the essential role that academic freedom plays in our community.

Today, we are excited to announce that the university’s board of trustees has adopted a Statement of Principles on Academic Freedom that will stand as Johns Hopkins’ public recognition of the singular importance of academic freedom to our mission and our work. We welcome you to read the final statement at the link on the right.

The statement was developed through an extensive consultative process that unfolded over the past many months. We convened a task force of faculty and students representing a broad cross-section of our community, and charged it with drafting an articulation of principles to guide the university in the decades to come.

The task force, chaired by Professor of Political Science Emeritus and Academy Professor Joel Grossman, met at length, solicited and received input from across the community, and submitted to us their recommended statement. This spring, we circulated that draft to the university community and asked for your thoughts. We received more than a hundred comments, and the provost visited faculty advisory boards in each of our schools to discuss the draft and receive further feedback. We made additional changes to the draft in response to many of these comments, resulting in the final statement that is being distributed today.

We have wrestled with difficult issues relating to academic freedom in the past and will undoubtedly continue to do so in the future. Still, we believe that an explicit endorsement and adoption of these principles represents an important milestone for Johns Hopkins. As America’s first research university, we are situated at the intersection of intellectual exploration, academic debate, and groundbreaking discoveries in the sciences, the humanities, the professional disciplines, and the arts.

In all these endeavors, academic freedom serves as our lodestar. We thank Professor Grossman, the task force, and the entire community for their contributions to the university, and their role in nurturing this foundational value.