From 1924 through 2016, fourteen provosts and six interim provosts have served at Johns Hopkins University. The 15th Provost, Sunil Kumar, assumed the role in September 2016. 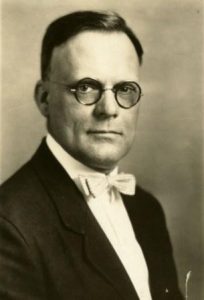 In December 1923, Charles Keyser Edmunds was appointed to the newly-created position of provost of Johns Hopkins University. The Board of Trustees did not stipulate any official duties though the position was created to serve as chief assistant to the president.

Edmunds earned his A.B. and Ph.D. in physics from Johns Hopkins. Prior to becoming provost, he was president of Canton Christian College (later Lingnan University) in China. He was also a magnetic observer in China for the Carnegie Institution of Washington.

From 1928 to 1941, Edmunds was president of Pomona College in Claremont, California. 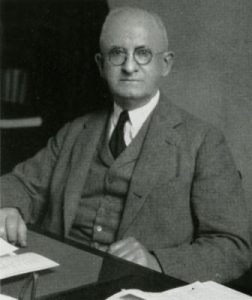 In successive roles as student, professor, provost, dean, and president, Joseph Sweetman Ames spent sixty years at Johns Hopkins. He received his A.B. from the university in 1886 and his Ph.D. in physics in 1890. Following a year of study at the University of Berlin, he joined the Johns Hopkins faculty, eventually becoming director of the physics laboratory.

Ames had a particular interest in the science of aviation. In 1915 he was appointed by President Woodrow Wilson to the newly-established National Advisory Committee for Aeronautics. He later served as chairman of this committee which would evolve into the National Aeronautics and Space Administration (NASA).

In 1924 Ames was named to the newly-created position of dean of the College of Arts and Sciences. Two years later, while maintaining his position as dean, he became provost. In this new role he undertook a detailed study of tuition fees and served as secretary of the board of trustees and vice-chairman of the governing boards of the faculty.

From 1929 to 1935 Ames served as president of Johns Hopkins—a difficult tenure as the Great Depression had contributed to a fivefold increase of the university’s deficit. 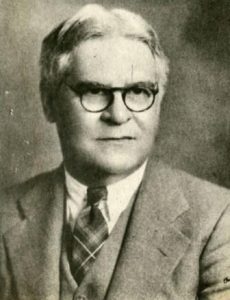 Edward Wilber Berry was one of the foremost paleontologists of his time. Although he never earned a college degree, he became a professor of paleontology at Johns Hopkins in 1916. Berry had first come to the university ten years earlier as a lab aide.

When Provost Joseph S. Ames assumed the presidency of Johns Hopkins University in 1929, Berry was appointed to replace him as dean of the College of Arts and Sciences. Since Ames did not appoint a provost, Berry served as the president’s chief advisor. President Ames retired in 1935 and was replaced by Isaiah Bowman, who immediately appointed Berry to the additional post of provost.

As an administrator, Berry advocated for the end of intercollegiate and commercialized football and for allowing students to begin graduate studies without first obtaining a bachelor’s degree. 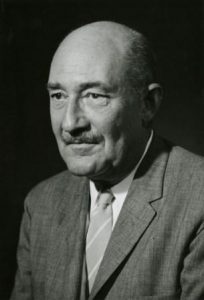 Stewart Macaulay received his A.B. from Johns Hopkins in 1923. After graduation, he worked as a reporter and editor for the Baltimore Sun. In 1936, Macaulay returned to Johns Hopkins in the newly-created position of secretary to coordinate the university’s public relations and alumni affairs.

Macaulay was appointed provost in 1942, and on several occasions was acting president during President Isaiah Bowman’s extended absences from the university. Macaulay was instrumental in the post-war development of government-sponsored research at Johns Hopkins, especially at the university’s Applied Physics Laboratory.

In recognition of his years of service to four university presidents, Macaulay was named to the new position of executive vice president in 1959. Upon his retirement due to illness in 1966, the position of was abolished. He died a few months later.

In 1966, William Bevan, vice president for academic affairs at Kansas State University, became provost and vice president for academic affairs at Johns Hopkins. He chaired the committee that led to the formation of the Society of Scholars, which recognizes the accomplishments of former Johns Hopkins postdoctoral fellows, and chaired the University Planning Committee in 1969–1970.

Bevan received his bachelor’s degree from Franklin and Marshall College, and his M.A. and Ph.D. in psychology from Duke University. His primary research interests were in psychophysics, perception, and physiological psychology. Prior to coming to Johns Hopkins, he taught at Heidelberg College, Emory University, and Kansas State University.

In 1970, Bevan left Johns Hopkins to become the executive officer of the American Association for the Advancement of Science (AAAS) and publisher of the organization’s Science magazine. He became chair of psychology at Duke in 1974, and then provost in 1983. At Duke he is best known for founding the Talent Identification Program (TIP), which was modeled after the Johns Hopkins Center for Talented Youth (CTY). Bevan ended his career at the John D. and Catherine T. MacArthur Foundation, where he served as vice president and director of the health program. 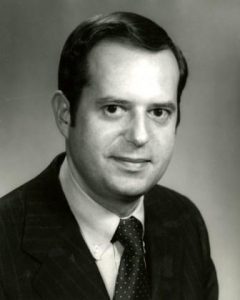 Muller received his B.A. from UCLA in 1948, studied at Oxford as a Rhodes Scholar, and earned his Ph.D. in political science from Cornell in 1958. A specialist in comparative government, he taught briefly at Haverford College and then at Cornell, where he became vice president for public affairs in 1966.

As president of Johns Hopkins University from 1972 to 1990, Muller oversaw the addition of the Peabody Conservatory, the construction of the Bloomberg Center for Physics and Astronomy and the Space Telescope Science Institute, and established or enlarged academic centers in downtown Baltimore, in Montgomery County, at the Applied Physics Laboratory, and in Nanjing, China. 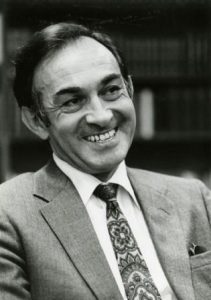 Harry Woolf came to Johns Hopkins in 1961 as the first Willis K. Shepard Chair of the History of Science. Previously he had taught physics, history, and the history of science at Boston University, Brandeis University, and the University of Washington. Woolf received bachelor’s and master’s degrees from the University of Chicago and a Ph.D. from Cornell in 1955.

Woolf was named provost of Johns Hopkins in 1972. He was a founding member and trustee of the Johns Hopkins Program for International Education in Gynecology and Obstetrics (now Jhpiego, a Johns Hopkins affiliate), of which he also served as president and board chairman.

Woolf left Johns Hopkins in 1976 to become director of the Institute for Advanced Study, an independent research institution in Princeton, New Jersey. 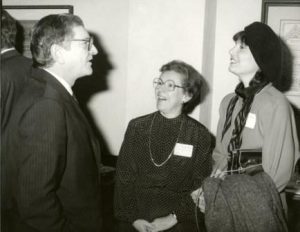 Richard Pancoast Longaker, a professor of political science at UCLA, was appointed provost and vice president of academic affairs of Johns Hopkins University in 1976. He received a B.A. from Swarthmore, an M.A. from the University of Wisconsin, and a Ph.D. from Cornell in 1953.

Longaker, like his predecessors, served as chief academic officer and acting president in the absence of the president, and presided over faculty assemblies, councils, and boards in the university. He played an important role in the founding of the Center for Talented Youth (CTY) in 1979 and the founding of the Johns Hopkins School of Nursing in 1983.

In 1986, Longaker resigned in order to return to Los Angeles as west coast representative for Johns Hopkins. 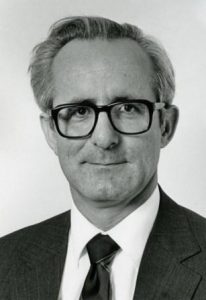 In 1987, John V. Lombardi left his position as dean of the College of Arts and Sciences at Indiana University to become provost and vice president for academic affairs at Johns Hopkins University. In November 1988, President Steven Muller announced that he would be devoting the majority of his time to fundraising. As a result, the trustees approved conferring the duties of chief operating officer on Lombardi, giving him responsibility for all day-to-day operations of the university in addition to academic affairs.

During a time of deficits in several university divisions, Lombardi played a vital role in crafting the university’s first five-year plan that would eventually bring the operating budget back into the black. Lombardi holds a bachelor’s degree from Pomona College and a Ph.D. from Columbia University. Prior to becoming dean at Indiana, Lombardi was a professor of history, specializing in Latin America. 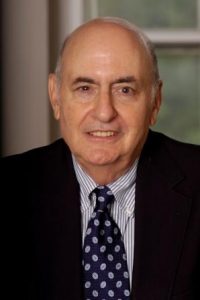 Joseph Cooper spent 24 years at Rice University where he was, at various times, chairman of political science, first dean of the School of Social Sciences, and president of the Institute for Policy Analysis. He earned his undergraduate, master’s, and doctoral degrees from Harvard University.

In 1991 Cooper became provost of Johns Hopkins University. He organized and led the Committee for the 21st Century, whose 23 recommendations led to major initiatives in information technology, expanded global partnerships, and greater financial self-sufficiency for the university. In 1993 Cooper founded the Provost’s Undergraduate Research Awards (PURA) program to support undergraduate research.

In 1995 Cooper stepped down as provost to focus on research and teaching as a professor of political science at Johns Hopkins. 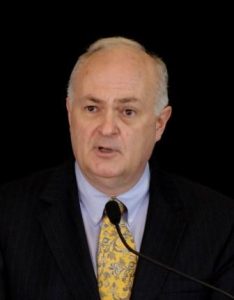 Steven M. Knapp came to Johns Hopkins in 1994 as dean of the School of Arts and Sciences. Knapp was appointed provost of the university in October 1996, after serving in the position on an interim basis since January. Previously Knapp had spent 16 years on the faculty at the University of California, Berkeley. He is a specialist in 18th and 19th century English literature and literary theory. Knapp got his bachelor’s degree from Yale and his doctorate from Cornell.

As provost, Knapp gave special priority to the university’s role in the community and helped establish the Urban Health Institute. He was also strong advocate of diversity and helped establish the Office of Equal Opportunity and Affirmative Action Programs (now, the Office of Institutional Equity), the Diversity Leadership Council, and the University Committee on the Status of Women.

Knapp left Johns Hopkins in 2007 to become president of The George Washington University. 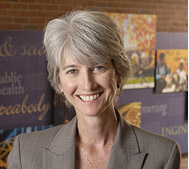 In 2007, Kristina M. Johnson, dean of the Pratt School of Engineering at Duke University, became provost and senior vice president for academic affairs of Johns Hopkins University. In this role she led the Framework for the Future strategic study and launched the Mosaic Initiative, which has provided $5 million in matching funds to departments to increase faculty diversity. Johnson also appointed three faculty members to serve part time as vice provosts.

Johnson received her B.S., M.S., and Ph.D. degrees in electrical engineering from Stanford University. Her research focused on the field of “smart pixel arrays.” An entrepreneur, Johnson has co-founded several companies and holds 130 U.S. and foreign patents.

From 2009 to 2010, Johnson served as under secretary of the United States Department of Energy. 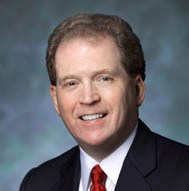 As the university’s 13th provost, Lloyd B. Minor launched many university-wide initiatives such as the Gateway Sciences Initiative to support pedagogical innovation and the Doctor of Philosophy Board to promote excellence in Ph.D. education. He worked with others around the university and health system to coordinate the Individualized Health Initiative, which aims to use genetic information to transform health care. He established the highly successful Provost’s Lecture Series and the Provost’s Office Fellows program.

Prior to his appointment, Minor served as Andelot Professor and director (chair) of the Department of Otolaryngology–Head and Neck Surgery in the Johns Hopkins School of Medicine and otolaryngologist-in-chief of The Johns Hopkins Hospital. In the medical community, Minor is perhaps best known for his discovery of superior canal dehiscence syndrome, a debilitating disorder characterized by sound- or pressure-induced dizziness.

In July 2012, Minor was named dean of the Stanford University School of Medicine and joined Stanford on September 1, 2012. 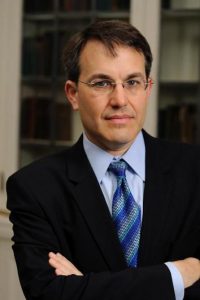 Robert C. Lieberman was selected as Johns Hopkins University’s 14th provost in April 2013 and assumed the role in July of that year. Previously, he served as interim dean of School of International and Public Affairs at Columbia University, where he had been a member of the faculty since 1994.

Over his three years as provost, Lieberman played an active role in strengthening governance and academic decision-making at JHU, and his scholarly expertise made him a natural advocate for the role and value of diversity. He conceived the highly successful JHU Forums on Race in America, led the development of the Faculty Diversity Initiative—a five-year program designed to bring outstanding under-represented and minority faculty to Hopkins—and worked to enhance the university’s practices and accountabilities around equity issues.

Lieberman completed his term as provost on June 30, and then returned to full time faculty in the Department of Political Science to pursue his acclaimed research and scholarship on issues of race and inequality.