Recommendation 2: Increase the flexibility of the major requirements where needed to enable intellectual exploration

The model of undergraduate education CUE2 recommends places disciplinary expertise at its center. Being trained in a distinct set of methods and acquiring the knowledge particular to a discipline are essential features of an undergraduate education. Moreover, without strong disciplines one cannot imagine strong interdisciplinary programs. But disciplinary expertise must be rooted in a liberal education. The best scholars, as President Gilman remarked in his inaugural address, “will almost invariably be those who make special attainments on the foundation of a broad and liberal culture.” This education contributes to their flourishing, independent of and beyond any credentials we might issue.

Our faculty habitually forge connections among disciplines; undergraduates should be encouraged to do the same. For students to pursue the leads provided by disciplinary training, they must be given room to leave their disciplines and learn elsewhere. As urged by its charge, the Commission proposes to build on the positive features, including curricular flexibility, which distinguish us. The curriculum of any university, as Jonathan Cole remarked in his Town Hall Presentation, “should dovetail well with the identity of the university and represent a realization of its basic principles and goals.” Hopkins has offered its students flexibility since its founding. That flexibility assumes maturity of the students and aims simultaneously to promote that maturity, cultivating the independence of thought necessary for life-long learning.

The diversity of our students implies diversity of thought, ambition and goals; as a result, curricula should not assume that one path will suit all students, even within a discipline. Data from student focus groups and the most recent surveys indicate that our students continue to value this flexibility and are dissatisfied when it is absent. The initiative, breadth, and independence assumed by a flexible curriculum also are valued by industries presently driving the global economy. According to a recent study conducted by Hart Research Associates and published by the American Association of Colleges and Universities, “employers recognize capacities that cut across majors as critical to a candidate’s potential for career success, and they view these skills as more important than a student’s choice of undergraduate major.” Nearly all those surveyed (93%) agree that “a candidate’s demonstrated capacity to think critically, communicate clearly, and solve complex problems is more important than their undergraduate major.” Many prominent business leaders, including Johns Hopkins alumnus Samuel Palmisano (former CEO of IBM), have confirmed this view and have offered full-throated endorsements of a broad and liberal education, rather than a narrow, exclusively technical or exclusively non-technical one.

Institutional data in Figures 4.5-8 show that curricular flexibility, as measured by the fraction of credits restricted by a student’s major, varies widely across departments, and is highly restricted in some. The Department of Philosophy requires the completion of 33 credit hours (27% of the total needed for graduation); Biomedical Engineering requires roughly three times that number, 104 (80% of the total needed for graduation). Data also suggest some majors at Hopkins are outliers among their peers at other universities, requiring a greater percentage of credits to be completed in the major. Of the majors and peers studied by CUE2, our majors in Biomedical Engineering, Civil Engineering, Computer Science, Environmental Engineering, Materials Science and Engineering, and Mechanical Engineering in WSE, and KSAS’s Biophysics, Chemistry, Environmental Science and Studies, Physics, Anthropology, Political Science, Art History, Classics, History, Latin American Studies, and Writing Seminars all have markedly less flexibility than similar majors at peer institutions. While not as striking, several other majors in both schools also appear quite restrictive. This is just one possible metric for curricular flexibility, which may also be encouraged by strict course sequencing, course offerings that occur only annually, and lack of on-line options that could facilitate participation of students undertaking opportunities at remote sites. 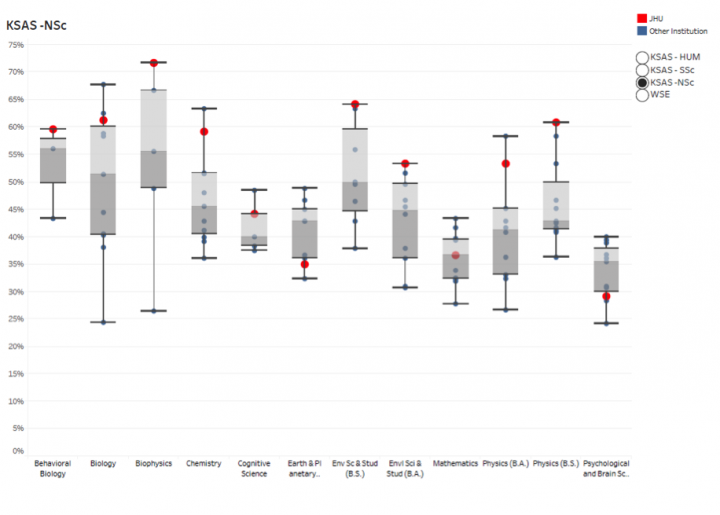 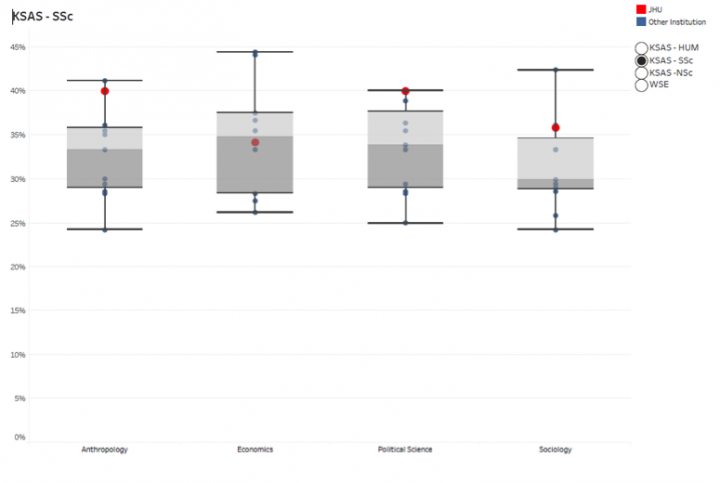 Figure 4.7 Flexibility in KSAS humanities majors as compared to peers. 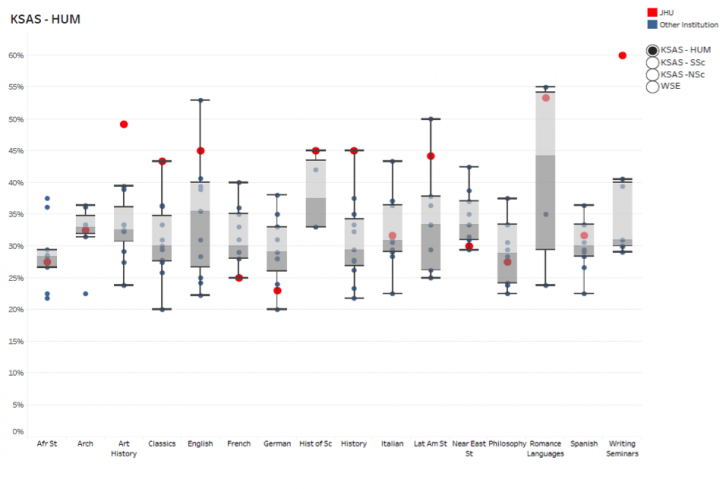 Figure 4.8 WSE flexibility in engineering majors as compared to peers.[2] 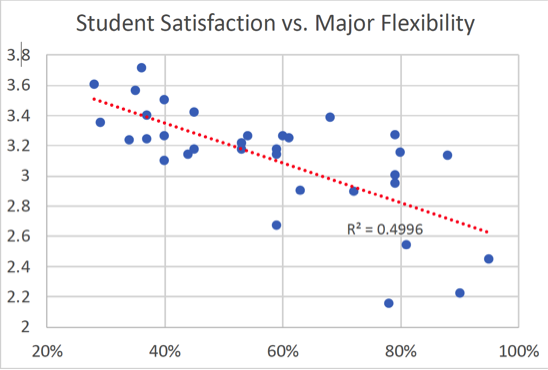 Both the disparity between departments and the restrictiveness in some departments have detrimental effects. The disparity creates a widely disparate experience among our undergraduates and contributes to the competitive culture; in conversations, students also report that it contributes to the segregation of the schools. Inflexible and high requirements tend to advantage students from high schools that offer AP credit, who can complete their requirements more quickly. (Increasing student flexibility within the major thus aligns with the Hopkins Universal Design for Learning Initiative[3]Finally, highly restrictive requirements also would prevent the implementation of a separate CUE2 recommendation; the requirements of some majors at present would make graduation in four years impossible, were a student to participate in the Hopkins semester (see recommendation 2, below).

We recommend that the provost require that a minimum of 33% of all student credit hours be un-prescribed across all undergraduate majors in the Krieger School of Arts and Sciences and Whiting School of Engineering. Furthermore, because increased flexibility would serve faculty members by freeing them of the burden of major requirements, the Commission recommends that the University create an innovation fund to support imaginative courses and programs and develop mechanisms to generalize pedagogical successes.